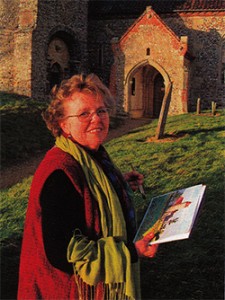 I was born in 1938 on a farm near the wild acres of Marsham Heath, Norfolk. I was gifted with a talent for art, and spent a wonderful childhood, drawing and painting the wild animals and surrounding countryside. I went to church, joined the choir and became a keen bellringer.

After schooling in Norfolk I trained in London, as a window dresser. Later I continued the same work in London Street, Norwich. In 1967 I moved to Potash Farm, Tuttington, where I bred chickens for eggs and the table, but never stopped painting. In 1979 I opened a shop in Wells-next-the-Sea called The Ashley Studio, selling stationery and original pictures.

Doodling, whilst on the telephone led to my first cartoon style postcard of Wells. This range expanded and then included a Wells Calendar which is now in its 13th year, and sent all over the world. Norfolk China now produces mugs, place mats, coasters, clocks, key rings, pens and tea towels with my designs and are sold throughout he British Isles. My designs have graced the cover of the very popular Wells Carnival Week programme for many years.

My ability for producing a good likeness, whilst not exactly portraiture, has encouraged people to purchase works in which they ‘appear’. These designs centre entirely on Wells and the events and situations occurring throughout the year. This has led to commissions here in Norfolk and as far afield as Blarney Castle in Ireland to create artwork for similar artefacts as my own range. Some of my card designs are now being printed by the well known Green Pebble card manufacturer.

I have exhibited in Norwich Assembley Rooms and also published two books. ‘Things My Mother Taught Me’, an illustrated book of proverbs and in 2012 produced “Hazel Ashley’s Round Tower Churches of Norfolk’, a personal selection of some of the many round tower churches for which Norfolk is famous.

My other love is gardening. Though my garden is minute it is open for the National Garden Scheme and also the local Open Gardens Day in aid of St. Nicholas Church, Wells.

Although my main work is in watercolour I also paint using oils, pastels and acrylics. I accept commissions in all these media.

I have been a member of Wells Art Group for over 20 years and regularly organizes summer outdoor painting sessions for the group.

I am very close to my family, all living in Norfolk. My son, who runs Ashley Electricals and three beloved granddaughters, one of whom has inherited my artistic talent. 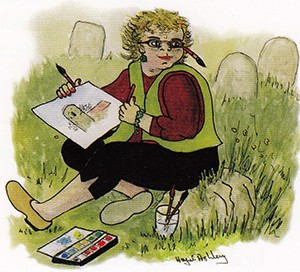